Longplayer : A Proposed Score for 6 Players
Jem Finer, October 2002 (Revised May 2008)
In a nutshell, this is how Longplayer works:

1. Take one piece of source music:

2. Repitch it into five transpositions.

3. Play the original and the five transpositions simultaneously.

4. Every two minutes, start again from a point slightly advanced from where you last started.

5. Assign a different amount of advancement to each transposition and use it consistently.

Think of it instead as a closed, seamless loop where A = B:

Score For 6 Players
To create a score for humans to play Longplayer, it’s possible to use the waveform of the source music as the basis of a graphic score. It must be duplicated once for each of the six transpositions, with one player playing each at all times. 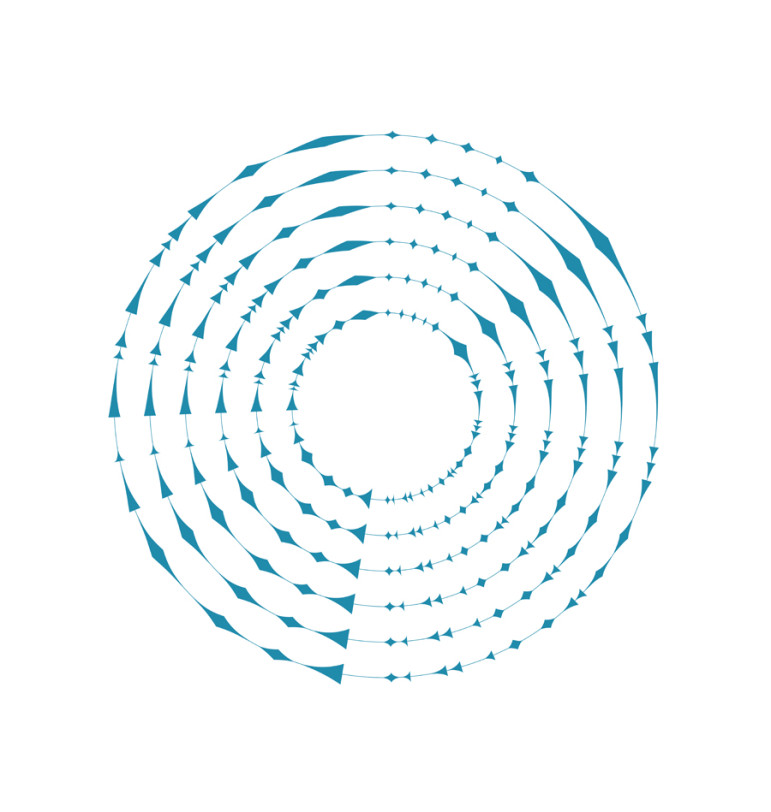 Next to each event represented in the waveform place the corresponding physical bowl, as follows: 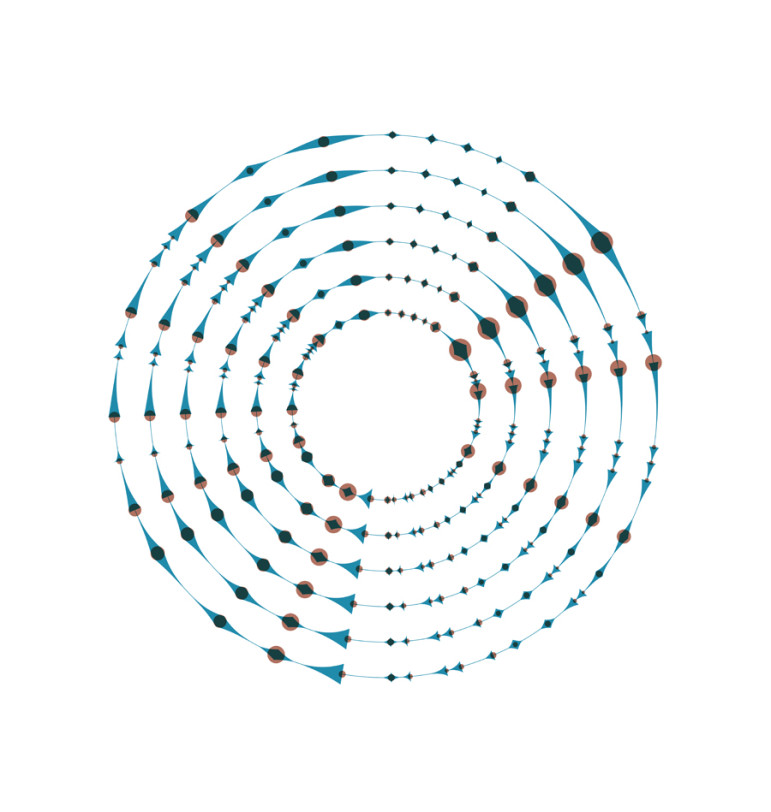 There are several ways of playing the bowls:

1. Hitting them, characterised by a fast attack and slow decay:

All the player needs to know now is where to start playing from, where to stop after each 2 minute period, how far to advance when starting again, and how to keep time.

Timing
There needs to be some form of timer, visible to all six players, by which to time each 2 minute period. The simplest form of timer would be an hourglass… or rather a ‘two minute glass’. There may need to be a conductor visibly keeping time.

Along the edge of each score is a sliding marker. The distance between its start and end points represents 2 minutes of playing time. The player takes the segment of the waveform within the boundaries of this selection as an instruction as to what to play.

Using the above segment as an example, the player would play the smaller bowl for the first 30 seconds, running a stick around its rim. The method of playing can be deduced by observing that the attack phase of the waveform is gradual, as opposed to the sharp attack of a struck bowl.

The peak of the bowl’s amplitude (volume) is at around 10 seconds, so after this point the player must play increasingly gently, until after about 20 seconds the bowl is silent again.

The second bowl in this section is again played by running a stick around its rim. The player starts at the 30 second mark, and gradually increases the amplitude for the next minute, after which it slowly decreases.

Looking at the waveform for this second bowl, it can be seen that at the 2 minute mark it isn’t silent – and will not be for another 30 seconds or so. The player must therefore use his hand to gently dampen the vibrations of the bowl at the 2 minute mark.

At the end of each 2 minute interval, several things have to occur:

2. The marker must be advanced by the predetermined increment, either mechanically, by the player, or by an assistant.

In this way the music is played, one person for each of the six transpositions.

Physical Arrangement
Physically, the six transpositions of the original source music are laid out as concentric circles, with the highest pitched in the center and the lowest pitched on the outer ring.

What If The Music Stops?
Either:
It is continued from the point at which one finds the markers (i.e. Longplayer might last longer than 1000 years, but would be complete – though with intervals).
Or:
The markers are reset to where they would be had the performance never stopped (i.e. Longplayer would last exactly 1000 years but be incomplete).

What if there’s no one to play it?
It stops until there are.
Or:
There is a simple automation of the human part of the process. This option is not too tricky. In fact, this score forms the basis of a mechanical means of playing Longplayer. This would require 2 things:
1. A means of playing the bowls, and
2. A mechanism for advancing the markers.